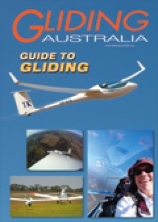 (High-resolution version 15MB)
The Guide to Gliding is an 8-page brochure that has been produced to promote gliding to new members.

You can download and then save the document to your computer.

Can anyone fly a glider in Australia?

To fly solo, you must be older than 15, be a member of the Gliding Federation of Australia (GFA) and a member of a recognised gliding club and have been cleared to fly solo by a qualified instructor. The health requirements are similar to that for getting a vehicle driver’s license. There is no mandatory upper age limit for flying a glider. To fly cross-country, you must have achieved a rating (C Certificate) which includes tests for outlandings and retrieves.

I don’t know if gliding is just for me. How can I have a test flight?

Trial flights are officially called ‘Air Experience Flights.’ You can get a trial flight before joining at any one of the 22 Victorian and Tasmanian gliding clubs. One will be at a convenient site to you. To find one click here. You can give them a ring and arrange it or alternatively, if the weather is reasonable, you can just turn up and take your turn on most weekends and public holidays. Some clubs operate 7 days a week.  Do bring a hat and sun glasses.

What age, height and fitness requirements are there?

Minimum age to fly solo is 15 Taring can commence before 15 but you need to be big enough for the straps to secure you well. There is no maximum age limit. Max weight is 110kg. You should be reasonably physically fit and have good eyesight with glasses is needed. Generally, if you are 6’3” (190cm) or less, you should be fine. If you are taller, there may be only certain gliders you can fit into.

How is a glider controlled?

Almost all sailplanes are flown with the same “3 axis” controls as any aircraft. A control column or joystick controls the elevator for pitch control, and the ailerons for roll control. There are pedals to control the rudder for yaw control. Pilots are in full control of the direction they wish to take providing they have sufficient height.

All sailplanes also have very efficient air brakes which are used to adjust the glide or descent angle when landing. Higher performance sailplanes have retractable undercarriages to reduce drag and flaps to optimise performance in fast and slow flight regimes.

How far can you fly? And how fast?

Experienced pilots on strong thermal days can regularly fly over 500 km and land back at base. The longest distance flown from in Victoria/Tasmania is over 1100 km. The world distance record is unofficially over 3,000 km, flown in wave lift in South America. Most sailplanes can easily achieve speeds of over 250 kph.

How do sailplanes get airborne?

There are two main ways to get be launched. The first is where the sailplane is towed up by a light aircraft with a tow rope. Both the glider and the tow plane have special tow releases for the rope. The sailplane releases when it has been towed to the desired height. The other principal method of launching for many gliding clubs is with a powerful winch. Once again, a special tow release is used at the glider end of the winch rope. When the glider is at the top of the tow, either the pilot releases the rope, or the release automatically lets go of the rope. Many modern sailplanes are self launching. They have a motor concealed in the fuselage behind the wings which can be used to launch the glider and to get you back home if the lift stops.

The advantage of towing up behind an aeroplane (aerotowing) is that the sailplane can release at the height and location it wants to… hopefully in a thermal. The main disadvantage is cost. The advantage of winch launching is cost. Perhaps half that of aerotowing. The disadvantage is that the release height and location are more or less fixed, and it not quite as reliable a way of finding a thermal.

How does a sailplane stay up?

As long as a sailplane keeps moving forwards, lift generated by the wings keeps it up there, just as with a conventional powered aircraft. The sailplane is slowly sinking as it moves forwards through the air… in fact sinking far more slowly than powered aircraft.

Typically, a sailplane sinks at around 600mm per second. Updrafts in the air called thermals, commonly under clouds can rise up much faster than 600mm per second and lift a glider up to cloud base faster than almost any powered aircraft can climb… but even in this rising air, the glider is still sinking relative to the air it is flying in.

At some sites, lift is found on ridges and mountains, where the air is deflected upwards by the shape of the terrain. Lift is also found in wave lift which is similar to ridge lift, but more so! Altitudes of over 8,000 metres are common in wave lift, and the record is much higher than that.